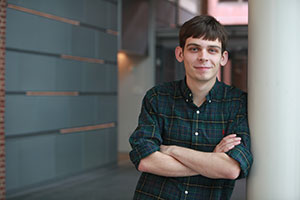 WILLIAMSTOWN, Mass., November 24, 2013—Williams College senior Brian McGrail is among the 32 American men and women named as Rhodes Scholars for 2014. The Rhodes Scholarship, the oldest and arguably most famous academic award for American college graduates, provides for two or three years of study at the University of Oxford in England.

McGrail was selected from among 857 students who had been endorsed by 327 colleges or universities and 208 who made it to the final stage of competition, interviewing with Rhodes committees this weekend in their home districts.

A double major in history and political economy from Arlington, Va., McGrail is interested in applying tools from academia to public policy work, especially in the area of tax reform to address income inequality.

As a Rhodes Scholar, McGrail plans to pursue a Bachelor of Arts in philosophy, politics, and economics at the University of Oxford.

McGrail said the Rhodes would provide him with an exceptional academic opportunity. “It’s a good complement to the Williams education, which gives you the backing you need to do policymaking,” he said. “Williams gives you that intellectual foundation, and this will build on that.”

McGrail worked with economics professor Jon Bakija last summer, researching federal and state tax policy as a Class of 1957 Scholar and Research Fellow, and he has worked as an intern or research assistant at the Brookings Institution’s Tax Policy Center, the Progressive Policy Institute, and Hedrick Smith Productions.

“Brian is committed to a career in public service and is well-suited for this due to his rare combination of beautiful writing ability, strong technical skills, passionate interest in and extensive understanding of economics and public policy as potential forces for improving people’s well-being, and a record of service to his community and the causes he cares about,” said Bakija.

Last spring, McGrail was awarded the prestigious Harry S. Truman Scholarship. At Williams, he has distinguished himself as a political activist, interning with Elizabeth Warren’s U.S. Senate campaign; as a volunteer, helping low-income residents prepare their taxes; and as a campus leader, serving on the Committee on Undergraduate Life, the College and Community Advisory Committee, and on College Council.

He learned of his selection after his interview in Atlanta on Saturday. “It’s definitely a weird moment,” he said. “It’s something of a long day, and the deliberation period is tense…then they read your name off, and you’re very happy, but you’re standing there next to seven other people who didn’t win.”

Saturday evening, McGrail shared the news with family and friends by phone as he waited in the airport in Atlanta for his flight, a little nervous about making his connection in Charlotte. “I have to get back because I have class on Monday,” he said.

He extended his gratitude to the Williams Office of Fellowships and everyone who helped him achieve this goal, including faculty members and others who wrote recommendations for him and helped him prepare. “Saying that one person wins is not reflective of the team effort that went into it,” he said. “I just want to say a big thank you to everyone.”

McGrail is the 37th Williams student to be named a Rhodes Scholar since the program began in 1902. The most recent previous Williams recipient was Marissa C. M. Doran in 2005. A full list and profiles of this year’s winners can be found on the Rhodes Trust website.

END
Founded in 1793, Williams College is the second-oldest institution of higher learning in Massachusetts. The college’s 2,000 students are taught by a faculty noted for the quality of their teaching and research, and the achievement of academic goals includes active participation of students with faculty in their research. Students’ educational experience is enriched by the residential campus environment in Williamstown, Mass., which provides a host of opportunities for interaction with one another and with faculty beyond the classroom. Admission decisions on U.S. applicants are made regardless of a student’s financial ability, and the college provides grants and other assistance to meet the demonstrated needs of all who are admitted.

Independent Study Screening: Samori Etienne '21, "What I Is?"
2:00 pm at Virtual Event