Assistant Professor of Biology David Loehlin’s favorite activity as a college student was spinning records at the campus radio station. “I loved finding connections between different genres of music,” Loehlin said. “Maybe I’m playing a set of ambient techno, but the next DJ shows up with 1960s country records. How do you bridge that gap?” In a biology class, he started seeing the potential to make similar connections. Today, Loehlin studies the function of tandem genes, a core part of human genome structure.

Variations in gene copy number occur frequently in humans and other organisms, leading to diseases such as autism, schizophrenia, and bleeding disorders, as well as variation in individual traits. Despite this growing relevance, biologists have a limited understanding of the direct effects of tandem gene duplication. 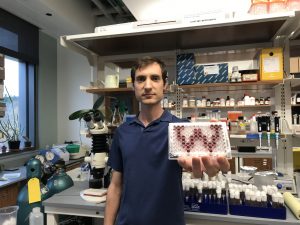 With support from a newly awarded three-year, $400,000 grant from the National Institutes of Health, Loehlin’s research aims to learn basic rules that apply to tandem duplicated genes. “Genome sequencing has sparked a technical revolution in biology, but we still barely know any rules of how genomes actually work,” Loehlin said. “One of the most basic rules I can think of is that if you make a second copy of a gene, the cell should make twice as much RNA and protein. But we were seeing more than twice, so what else is going on?”

Loehlin’s lab is investigating structural factors that have been found to regulate gene expression in other contexts and see if they have a differential effect on single-copy and tandem-duplicated genes. In order to do this, he and his students use genetic engineering techniques to build tandem and single genes and measure their gene expression in living animals, specifically Drosophila fruit flies.

“We still don’t know exactly how common these tandem duplication mutations are in cancer and individual genetic variation—the technology for detecting them is just catching up—but they are potentially super disruptive, for good and for ill,” Loehlin said. “Knowing how could help us better understand ourselves and our fellow organisms.”

The Green Room with Dee Dee Bridgewater: Voice out your Thoughts and Emotions
3:00 pm at Virtual Event

Bach and Beyond - lecture video
7:30 pm at Youtube
Williams Calendar »