AUSTRALIA, April 30, 2014–The clouds parted in Western Australia for yesterday’s solar eclipse. Jay Pasachoff, Williams College astronomy professor, led a small expedition to Albany, about six hours southeast of Perth, to observe the maximum of the eclipse that could be viewed; in mid-afternoon, 65% of the Sun’s diameter was covered by the Moon.  A small region of Antarctica with greater coverage was entirely inaccessible, with nobody viewing it there.

Pasachoff is Field Memorial Professor of Astronomy at Williams College and Chair of the International Astronomical Union’s Working Group on Eclipses. The event was the 59th solar eclipse he has viewed, for the most part to study the science of the sun’s atmosphere. 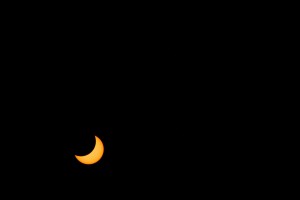 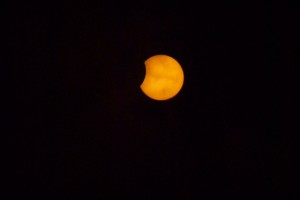 WILLIAMSTOWN, Mass., April 24, 2014–A partial eclipse will be visible across Australia on Tuesday afternoon, April 29, 2014. It will be highest in the sky in Western Australia, including Perth and Albany, and it will be visible low in the sky near sunset in Melbourne and Sydney.

A small bit of Antarctica, an inaccessible part, will have an annular eclipse, that is an eclipse in which the Moon is a little farther than average from the Earth so that it doesn’t entirely cover the sun to make a total eclipse. At an annular or a partial eclipse, the sky never gets dark, and to view it you need a special, safe solar filter or to project the image onto a wall or screen and then look away from the eclipse at the screen.

Even one per cent of the Sun is 10,000 times brighter than the Moon, so during the annular eclipse, the sun is too bright to look at directly. If you have a special solar filter (or very dense welder’s glass), or project the image onto another surface, you can detect that the Sun is being covered by the Moon.

It is interesting to know that the Sun is being eclipsed, and to realize that astronomers can predict the heavens, but it isn’t spectacular to watch. It’s especially good for students to watch (through filters or with projection) so that they can see that science keeps advancing and that we understand the universe–and that if they study math and science they, too, can understand the universe.

Jay Pasachoff, Chair of the International Astronomical Union’s Working Group on Eclipses and a veteran of 58 solar eclipses, will be in Australia to see the Sun 65% covered, a partial phase of this eclipse. At Perth and Albany in Western Australia, where the Sun’s diameter will be 60%-65% covered by the Moon, the eclipse will start at 1:15 p.m. and end at 3:59 p.m., with maximum coverage at 2:41 p.m. The Sun will start at 38° high in the sky, about the width of four hands at the end of an outstretched arm, and will end one and a half hands high.

The French amateur astronomer Xavier Jubier, of Paris, has put a map online; it is a Google map that can be zoomed into, and which enables you to click where you are and find out what you will see there: http://tinyurl.com/lnklbq8

Links to a variety of eclipse information are at Pasachoff’s website for the International Astronomical Union at www.eclipses.info.

Pasachoff’s annular and partial eclipse images are available at http://www.totalsolareclipse.org

All Together with Art: Things Around the House
10:30 am at Williams College Museum of Art (WCMA)
Singularities in Prime Characteristic Commutative Algebra by Prof. Austyn Simpson
1:00 pm