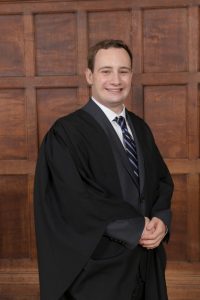 Nick Goldrosen ’20 has been awarded a highly competitive Gates Cambridge scholarship to study at the University of Cambridge in the United Kingdom. He joins a cohort of 74 members from 30 countries, plus up to 10 scholars who are deferring from 2020, in the program’s Class of 2021. A mathematics and political science major from Brooklyn, N.Y., Goldrosen discusses his next steps and longer term aspirations.

Congratulations on your Gates! What are your plans?

I’ll pursue a Ph.D. in criminology. The big question behind my research is how various parts of the criminal legal system react to reform—and how those reactions might undercut or complicate reform efforts. My current master’s research looks at police and progressive prosecutors—how do police reactions to progressive prosecution shape its actual policy effects? For my Ph.D., I’ll be using a network science approach to research policing, how bias and discrimination spread within police forces, and how these networks might shape police responses to reform.

I would say that, for much of my early life, I saw our criminal legal system as having a good core, with perhaps tinkering around the edges needed. Of course, that was as someone not used to seeing its true harshness. A series of experiences—professional and academic but most crucially personal—exposed me to two interrelated realities. First, the ambit of the U.S. criminal law is massive. Most people don’t go a day without doing something that they could be ticketed or arrested for. (Banal examples include crossing the street midblock and turning on your turn signal too late before changing lanes. In New York, where I’m from, there was a month or so in 2020 when it was illegal both to wear and to not wear a mask in public.) Of course, only certain people are actually policed for those—whiter and wealthier communities don’t see aggressive enforcement of minor laws. Second, when people in favored groups do violate even serious laws, the criminal legal system does possess the ability, though used inequitably and too infrequently, to treat them with minimal punishment. I think those experiences fundamentally shifted my view on the criminal legal system—it sometimes does have the ability to deliver justice, but those situations are sadly often the outliers. Instead, the core is overly expansive and harsh.

Why is this an especially important area to study now?

Many reforms are put forth as solutions to police violence and discrimination, but reform doesn’t just happen. It can get distorted, coopted, and rendered ineffective or even counterproductive. This process becomes crystal clear when police violence, especially against Black Americans, continues despite consistent attempts at reform. People and institutions, both within and without the criminal legal system, have deep ideological and material commitments to the status quo. To give a few examples: State legislatures might introduce laws to prevent local district attorneys from being less aggressive in how they prosecute. If a court or consent decree prohibits one overly intrusive or racially biased police tactic, police can find another one to substitute. Newly created police oversight bodies can be systematically blocked from obtaining access to the police records needed to do their jobs. These are examples of how a much broader array of political interests can resist or co-opt the most local or incremental reforms.

How do you hope your work will improve society?

My hope is that my academic work can identify how police reform goes wrong, and steer policymakers away from cosmetic or ineffective reforms. I would hope that my research has the ability to identify effective changes that can be made to policing as well as the steps necessary for their successful implementation. I do think that there are limits to academic work as a vehicle for change, though. All the research in the world might not summon the political willpower to enact change, which usually stems from the long-standing work of activists and the people most affected by over-policing. So, I’m hopeful that this sort of academic work can suggest more productive changes, but research isn’t a silver bullet.

What’s next after your Gates? Do you have specific career goals in mind?

I don’t have a particularly solid conception of that yet, to be completely honest. There are people I admire who do criminology and criminal justice policy work in academia, in government, in NGOs, and elsewhere — I don’t know yet where I’d land.

How did your Williams experience help prepare you for this path?

My academic background was certainly crucial. My coursework and research at Williams in math and political science shape the core of what I do — studying political questions of law and policing using quantitative tools. I’m also grateful for other courses I took in areas such as history, religion, and psychology, which are involved in how we think about law, crime, and punishment. I’m thankful for the chances I had to pursue independent research at Williams, whether through summer opportunities, courses, thesis work, or research assistantships. Finally, I’m grateful to so many people, in and out of the classroom, who provided mentorship and support.

Select Williams facilities and events are open to the public. Admission tours are available and guests are welcome at the Williams College Museum of Art, Sawyer and Schow Libraries and outdoor athletic events. Visitors are also welcome at indoor competitions and some performances and events. Proof of vaccination and masking are required for entry. See the Visiting Campus page for details.