WILLIAMSTOWN, Mass., May 15, 2019—Quenton Hurst, a senior at Williams College, has been named a Scholar by the Saint Andrew’s Society of the State of New York to pursue graduate studies in Scotland in the 2019-20 academic year. Hurst will receive $35,000 for his studies. He was one of three students chosen nationally to receive the scholarship.

A biology and German double major from Rockport, Mass., Hurst plans to study molecular medicine at the University of St. Andrews, investigating a potential pathogenic mechanism of fatal arrhythmias and myocardial infarctions. He also hopes to gain a better understanding of Scottish views on nationalized healthcare system in that country as a means of comparison to the U.S. system. 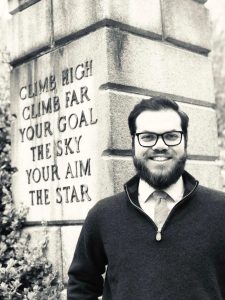 “My research, clinical, and analytical skills have prepared me well for conducting research on human tissues that lead directly to therapeutic cures,” says Hurst, an aspiring physician whose interest in medicine began with clinical work in Liberia during Williams’ Winter Study program. “With its focus on molecular medicine and human pathological pathways, the University of St. Andrews biomedical sciences degree in molecular medicine perfectly aligns with my objectives.”

At Williams, Hurst conducted a senior thesis project examining underlying mechanisms of epilepsy. Beyond academics, he is a member of the Williams College Concert Choir and the chamber ensemble In Echo. He has also competed on Williams’ men’s water polo and crew teams. In addition, he was a leader and executive director of Leading Minds, an orientation program for the college’s first-year students, and has been an Eagle Scout since 2014.

A recipient of the Mary T. Lane Foundation scholarship and the Biersach Family scholarship, he has completed internships in the medical field at Cornell University and Southern Vermont Medical Center. He also volunteered at the National Oceanic and Atmospheric Administration’s Office of Habitat Restoration.

Hurst, who is of Scottish heritage and has developed a deep appreciation for the country, says he looks forward to experiencing his ancestral towns, the Highlands, and the vast array of cultures. “Exploring Loch Lomond, boating across Loch Ness, standing atop the Wallace National Monument above the clouds, and Ceilidh dancing, have granted me a lasting sense of kinship to the culture and the people.”

The Saint Andrew’s Society Scholarship Program, created by the Saint Andrew’s Society at its bicentennial in 1956, has provided more than 200 scholarships “to promote cultural interchange and goodwill between Scotland and the United States,” according to the organization’s website. The society provides funding for two Scottish graduate students to study in the U.S. and three Scottish-American students to study in Scotland.

Hurst is the fifth Williams student to be named a St. Andrew’s Scholar. Past winners are Anna Mullikin ’98, Emily Isaacson ’04, Hannah Cunningham ’11, and Michael Q. May III ’17.

Building a Career in Theatre, Film, and Television
1:00 pm at Directing Studio, ’62 Center