“In addition to making major contributions to the Women’s, Gender, and Sexuality Studies Program and the college, Greg Mitchell has already published pioneering work at the intersections of sexuality, gender, race, class, and nation,” says Denise Buell, dean of the faculty and Cluett Professor of Religion. “It is a terrific affirmation of his work to have his second book project recognized by this prestigious ACLS award.”

The Burkhardt Fellowship carries a $95,000 stipend and a $7,500 research budget, allowing awardees to take up a yearlong residency at an institution whose resources and scholarly community are suited to facilitate his or her research project. The program, which is celebrating its 20th anniversary, “has supported a generation of scholars, helping them advance ambitious, far-reaching research projects and setting them on a path to leadership in the humanities,” says Matthew Goldfeder, director of fellowship programs at ACLS.

Mitchell’s fellowship will take him to the Program in Gender and Sexuality Studies at Princeton University for the academic year 2019-2020, during which time he plans to complete his latest book project, 40,000 Missing Girls: Moral Panics, Global Sporting Events, and the Spectacle of Sex Trafficking. 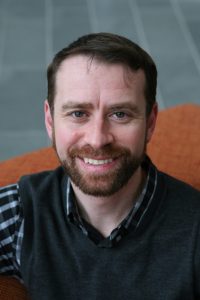 “I am deeply moved to be allowed to work alongside the professors at Princeton, whose scholarship has long inspired me. The faculty in Gender and Sexuality Studies will be remarkably well-suited interlocutors for me as I explore these questions of police violence and sex worker rights vis-a-vis major sporting events,” says Mitchell. “Having the space and time to devote to writing my second book is so vital, and I’m deeply appreciative of the Dean of Faculty’s Office for supporting me in pursuing this project, both during this fellowship and through research funding in the last few years. Not many liberal arts colleges are as devoted to uplifting faculty research efforts (especially post-tenure) as Williams is.”

Mitchell is the author of Tourist Attractions: Performing Masculinity & Race in Brazil’s Sexual Economy (University of Chicago Press, 2016), an ethnography of men who sell sex in several cities in Brazil. His current book project examines how states incentivize particular narratives and performances of nationalism in their attempts to police female sex workers, especially during global sporting events. In the book, Mitchell will document how raids and rescue operations became increasingly commonplace in brothels across Brazil as the 2014 World Cup and 2016 Olympics approached.

“This will be the first book-length treatment of this subject and the first to take a truly global approach,” says Mitchell. “We know this pattern of collateral violence against sex workers as a result of human rights interventions gone awry during major sporting events happens over and over again, but no one has yet done research on the ground in so many places—London, Russia, Qatar, Brazil, Greece, Japan, South Africa—and no one has tried to incorporate the many disparate voices of sex workers, police, policy makers, intelligence personnel, missionaries, activists, and politicians all in one book. It’s hugely ambitious and it may fail to do everything I want in the end, but I’m glad to have the support of ACLS, of Princeton, and of Williams in trying to accomplish my goal and produce the best version of this book that I can.”