WILLIAMSTOWN, Mass., April 27, 2016—Williams College senior Elizabeth Jacobsen has been awarded the Jeffrey Owen Jones ’66 Fellowship in Journalism. The $10,000 grant is intended to assist a graduating senior in starting a career in journalism, whether in traditional or new media.

The Jones Fellowship was established in 2009 to honor Jones, who passed away from lung cancer in 2007. Jones was an Emmy-award winning writer, producer, and film professor at Rochester Institute of Technology. While a student at Williams, Jones was editor of the school newspaper, The Williams Record.

A fellowship committee gathers each spring to consider project proposals. The committee aims to select a student who displays the qualities for which Jones was admired: “integrity, talent, independence of mind, wit, strength of character, skepticism of authority, and concern for others.” This year’s committee members were Peter Richardson ’66; John Kleiner, professor of English; and Mary Dettloff, director of media relations. 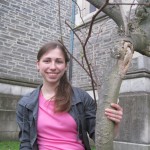 Jacobsen, a double major in English and biology from Saint Paul, Minn., plans to pursue a master’s in science writing at Johns Hopkins University next fall. She will use the fellowship to travel to science-writing conferences for networking and educational purposes, also to pursue stories for her two science blogs, The Adventures of a Tree Climber and I Love You, Trees, and start a new blog exploring the interface between science and religion.

Jacobsen’s interest in becoming a science journalist started during a study abroad semester in New Zealand in the fall of 2014. While doing biology research, she kept a blog about her experiences. “I found myself being drawn more and more toward writing about the scientific side of the natural world around me,” she said. “I wanted to share each discovery with people who could not see it for themselves. It was a path that felt right, a path I would later discover had a name: science journalism.”

Last summer, Jacobsen worked as an intern at the Smithsonian Institution after taking the initiative to email the editor in chief of the Smithsonian’s Botany Department newsletter, The Plant Press. While there, she researched topics, interviewed scientists, and wrote bylined pieces. At Williams, she began writing for ScientEphic, a science blog. She also took a course with Pulitzer Prize winner Elizabeth Kolbert, who taught Writing About Science and Nature this semester. In 2016, she was chosen to attend an American Association for the Advancement of Science conference to cover the event and have her story published on the National Association of Science Writers website. Her article was on measuring tools from high-energy physics and how they can help refine designs for clean energy.

Since 2013, Jacobsen has been working at as research and teaching assist for Joan Edwards, Washington Gladden 1859 Professor of Biology and chair of the biology department. As a research assistant, Jacobsen helped interpret research related to explosive seed, propagule, and pollen dispersal. She also helped care for plants in the research lab’s greenhouse, set up cross-pollinations, executed and recorded seed dispersal experiments with high-speed cameras and scored insect pollinators using time-lapsed cameras.

Edwards said Jacobsen would be a superb choice for the Jones Fellowship because “Elizabeth has been quick to pick up techniques for all the studies we have done. She has been creative in thinking of better or more efficient ways to do tasks. Furthermore, she is enthusiastic, interested, and upbeat no matter how tedious the job (potting up many plants) or how fussy the set-up (doing high-speed videos). She is a great member of our lab team.”

Jacobsen also has been a Williams Elementary Outreach science teacher and a writing workshop tutor.

After graduate school, Jacobsen plans to pursue a career in science journalism.