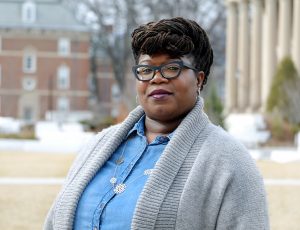 Mellon New Directions Fellowships assist faculty members in the humanities who seek supplemental education outside their formal areas of study. The program enables selected scholars to work on interdisciplinary projects or on problems beyond their expertise at a level of sophistication that matches their advanced training. New Directions Fellows receive the equivalent of one academic year’s salary, two summers of additional support, and tuition and course fees for their programs of study.

“When I was teaching Introduction to Religion in 2009, the year Tyler Perry’s Madea Goes to Jail, came out, I overheard some of my white students parodying the film—which depends heavily on filmic representations of the main character’s faith,” says Manigault-Bryant, whose previous research focused on religion and womanist/black feminist thought. “I decided that my future research and teaching would require developing the knowledge necessary to help students appropriately interpret representations of black women on the big screen.”

Manigault-Bryant will attend New York University’s Tisch School of the Arts, where she will pursue full-time training in film production during the academic year and complete an internship and further coursework during the summers. She has identified four goals for the fellowship period: To complete a multi-disciplinary monograph that will examine how film influences popular representations of the black female religious body; to expand the interdisciplinary fields of religious studies and film studies; to make film a counter-narrative to black men’s popular, negative representations about black women’s religious bodies; and to equip her students with the knowledge necessary to become critical spectators of popular visual media.

Manigault-Bryant earned a Ph.D. in religion at Emory’s Graduate School of Arts and Sciences. She first came to Williams as a Gaius Charles Bolin Fellow in 2006 and has taught at the college since 2011. Her books include Talking to the Dead: Religion, Music, and Lived Memory among Gullah/Geechee Women (Duke University Press, 2014) and Womanist and Black Feminist Responses to Tyler Perry’s Productions (Palgrave Macmillan, 2014).