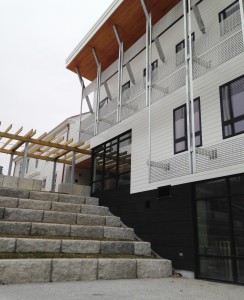 WILLIAMSTOWN, Mass., April 8, 2015—Later this month, Williams College will celebrate its recently completed Class of 1966 Environmental Center, a restoration and expansion of a historic building that seeks to meet the Living Building Challenge, the most rigorous and advanced measure of sustainability in the built environment. The celebration will include a public lecture by William Moomaw ’59 on Friday, April 17, and a dedication of the Environmental Center on Saturday, April 18.

The Living Building Challenge (LBC) program certifies buildings that have positive, regenerative environmental and community effects. Twenty imperatives set ambitious goals for energy (100 percent generated on site), water (100 percent captured, used, treated, and returned to the ground on site), materials (avoiding commonly known toxins, such as formaldehyde and PVC, while supporting local and regional manufacturers), and on-site food production (more than a third of the site will be used for organic food production).

For a building to meet the Living Building Challenge, it must demonstrate net-zero energy and water consumption for one year of full occupancy. Seven buildings worldwide have so far met the challenge, and the Environmental Center is among the first 25 to be registered in the program. It will likely become the first historic renovation in the U.S. to meet the Living Building Challenge.

“Our ambitions for this building speak to our commitment to the environment more broadly, and that’s not just about limiting harm; it’s about working to improve our planet,” says Williams president Adam Falk. “The Class of 1966 Environmental Center connects what students are learning in the classroom to their deep passions and activism around environmental issues, and it serves as a remarkable working model for what’s possible.”

Charley Stevenson ’93, principal at Integrated Eco Strategy, worked closely with the college and Black River Design Architects on the design and operation of the Environmental Center. He says a large part of the Living Building Challenge is about advocating for change in the market. “For years, we’ve had the technology and know-how to design and construct buildings that take care of all their own needs, while minimizing external impacts,” says Stevenson. “Achieving this high performance requires changes in the materials marketplace and new regulatory frameworks. LBC projects advocate for these advancements, and they serve to bring these approaches into the mainstream of construction.”

Williams’ new Environmental Center occupies the building formerly known as Kellogg House, which was built in 1794 as a home for the college’s first president, Ebenezer Fitch. It has been renovated and moved three times and was used as faculty housing for many years. In 1978, it became the home of the Center for Environmental Studies program, and now—with the renovation and addition to the building—it houses both the academic program and the Zilkha Center for Environmental Initiatives, the administrative operation that focuses on sustainability across the college. In addition to faculty and staff offices, the building has a classroom, kitchen, reading room, and an outdoor amphitheater, and it is open to students 24 hours a day. The project was supported significantly by gifts from alumni and grants, and the Class of 1966 provided the naming gift in honor of its upcoming 50th reunion.

Planning for the renovations to Kellogg House began in 2010. The resulting building maximizes useful space, minimizes energy and water demand, and will use on-site solar energy and rooftop water collection to produce 100 percent of the energy and water required for its operation. The offices are compact, and the larger rooms play triple duty, serving as classrooms and meeting rooms during the academic day, student study spaces and workrooms in the evenings, and social and informal gathering spaces for faculty, students, staff, and alumni throughout the year. Faculty and staff moved into the building in February.

“The community will need to work together in the building to see that it performs as intended, and there is tremendous educational value in that level of engagement,” says Stevenson, who has been named a 2015 Living Building Challenge Hero by the International Living Future Institute, in recognition of his commitment to LBC and his work to “continually raise the bar on behalf of the green building industry.”

A chemist turned policy scientist, Moomaw has focused his work on the climate, stratospheric ozone, energy, forests, water, and sustainable development. Moomaw was a lead author of five reports by the Intergovernmental Panel on Climate Change (IPCC) and the Millennium Ecosystem Assessment, and in 2007, he was a member of the United Nations-established IPCC that shared with Al Gore a Nobel Prize for its work on climate change research and policy.

A listing of dedication events follows. Events are free and open to the public. Please go to the Center for Environmental Studies website at ces.williams.edu for more information.