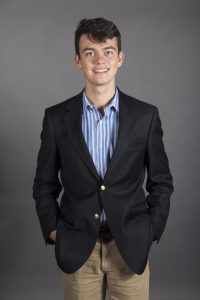 Avila grew up in Wilmington, Del., where he developed an interest in leadership and public service, which included raising money for the Andrew McDonough B+ Foundation for pediatric cancer research and Norman Oliver’s annual holiday turkey drive to assist families and seniors. With support from the Truman Scholarship, he plans to pursue a dual J.D. and M.S. in forestry and environmental science at the University of Michigan in preparation for a career in environmental law. “Climate change is the defining social justice issue of my generation and all levers of the American government must be deployed in the face of this challenge,” said Avila, a 2017 recipient of the Jefferson Awards Foundation Award for Excellence in Public Service.

Last summer Avila interned with the Special Narcotics Prosecutor for the City of New York, where he learned about American criminal law in theory and practice. He also developed an interest in researching criminality as a new direction to expand environmental regulation. “There is an undeniable moral component to climate change that cannot be answered with a carbon tax or administrative penalty,” said Avila. “Criminal law could fill the need for serious deterrence and retribution against those who cause such drastic and inequitable harm.”

While pursuing his studies at the University of Michigan, he intends to participate in the school’s Environmental Crimes Project and hopes to organize a pro bono effort to bring justice to the people of Flint, Mich., who have experienced a public health crisis as a result of the city’s contaminated drinking water. “I believe that the J.D./M.S. degree will bolster my technical skills for dealing with expert testimony in litigation,” said Avila. “Like Williams, Michigan has a reputation for professors who love to teach and students who love to learn.”

At Williams, Avila is a member of the Environmental Council, the Law Society, and the Society for Conservative Thought. He also serves on the board for Storytime, a weekly community storytelling event, and is a founding member of EphVotes, a student group that promotes voter registration. In addition, he competes and serves as captain for the college’s varsity cross country and track and field team.

After Williams, Avila hopes to work for the Senate bipartisan Climate Solutions Caucus and ultimately aspires to become a prosecutor in the Department of Justice’s Environmental Crimes Section. “Currently, this group has neither the capacity nor the statutory authority to prosecute cases against climate-damaging entities and actors,” said Avila. “I hope that my work in the Senate and perhaps after law school will enable them to do so.” In the meantime, he is eager to meet the other Truman scholars in his cohort and in the alumni network. “I am sure that they will become lifelong friends and provide an endless source of learning and inspiration.”

Avila is one of 62 recipients chosen from an applicant pool of 773 from 316 colleges and universities. Truman Scholars receive up to $30,000 toward graduate school and the opportunity to participate in professional development programming to help prepare them for careers in public service leadership.

The Harry S. Truman Scholarship Foundation was created by Congress in 1975 to be the nation’s living memorial to President Harry S. Truman. The Foundation has a mission to select and support the next generation of public service leaders. The Truman award has become one of the most prestigious national scholarships in the United States.