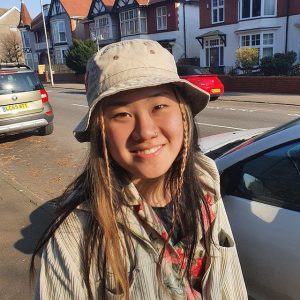 Crystal Ma ’21 has been awarded a prestigious Thomas J. Watson Fellowship, joining a cohort of more than 40 students from 22 states and 8 countries, each of whom will pursue independent exploration around the globe in 2021-2022. An art and biology major from Redmond, Wash., Ma shares her plans for the fellowship and beyond.

What will you do with your Watson Fellowship?

During my Watson year I will explore the emancipatory possibilities of live, experimental music production through four different musical subcultures that all maintain a shifting position between the polarities of the local and the global, the past and the present, the personal and the communal. I am attracted, specifically, to the underground electronic music communities in Kampala, Jaffa and Krakow which all refract traditional, regional musical culture through a modern, electronic lens. Each scene is rich with sounds that neither fit into the commercial mainstream nor adhere strictly to local musical styles or traditions. In these places, both traditional and modern conventions of composition, performance, transmission—vinyl, CD-R, tapes, soundwaves on the internet—and space—record stores, dancefloors, bedrooms, recording studios—are being questioned and subverted to reclaim marginalized identities. Through community-oriented sound and visual experimentation, using an ethnocentric approach to modern tools, I will explore how each of these communities use music to question internalized binaries, working to tear them down in myself as well.

How did you become interested in underground music? Why is it important?

Last year I studied abroad at the Williams-Exeter Programme at Oxford (WEPO) and got really into the DnB (Drum and Bass) scene there because of my friend Hannah. I wouldn’t say that DnB is necessarily “underground” but it was definitely my foray into the praxis of live music wherein production, dissemination and consumption are collapsed into a single moment. From there I started getting into the more experimental, electronic stuff. My classically trained left brain was fascinated by DnB because somehow it incorporates two completely discordant musical elements: a ferocious and unrelenting drum programming on one hand and light, minimal manipulation of melodic textures on the other.

I received a grant from CES/CLiA over the summer to dive deeper and interviewed DJ Bailey, a Jungle/DnB DJ who had witnessed the entire birth and evolution of the subgenre: DnB began as a widely disparaged and supposedly illiterate form of music. It initially evolved among the Caribbean diaspora in South London without any media coverage or appraisal. What brought the two antagonistic musical components together was the rumbling reggae bassline—an obvious indebtedness to Caribbean soundsystem culture. The sound of DnB conveys a sense of social and cultural dislocation that speaks to my search for self. Witnessing the movement of musical forms across the boundaries of race, nation and authenticity, I experienced a more complex intersection between private and public histories, and arrived at a more complex understanding of culture and of myself.

How do the arts fit into a liberal arts education?

I’ve taken classes in at least 12 different disciplines at Williams, and I always find myself gravitating towards art because out of all these disciplines, art was the only one that acknowledged that knowledge is valuable not only when it is applicable, useful or testable but also when it is emotional, human, spiritual and personal.

What are your post-Watson plans?

I want to work with my hands, be in constant movement and thread culture together to create community and thwart alienation. I want to help myself, my community and the world achieve a balance between the Apollonian (clarity, logic, reason) and the Dionysian (disorder, intoxication, emotion).

Do you have a dream job?

I want to get a Ph.D. in plant genetics so that I can breed orphan crops—crops that have a lot of regional cultural significance but lack the profitability that industry and research networks seek—working to increase their yield potential and climate resilience. But I also deeply believe that art has a necessary role in the reimagining of our collective futures: in our daily lives, in politics, in law—and in plant science.

Who has been a major influence in your life?

I guess with regards to the development of this (Watson) project, specifically, I’d have to say Hannah. She came up to me at a social event during orientation week—I remember feeling really nervous —and invited me to a play her dad had produced which was touring and happened to be showing at the main theatre in Oxford. The rest is history!