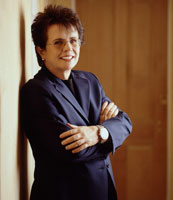 WILLIAMSTOWN, Mass., March 13, 2013—Sports icon and social justice advocate Billie Jean King will be the principal speaker at Williams College’s 224th Commencement Exercise on Sunday, June 2. The day before, Pulitzer Prize-winning author and columnist Stacy Schiff ’82 will be the Baccalaureate speaker, and Annie Lennox, singer-songwriter, political activist, and humanitarian ambassador, will participate in a conversation on campus.

King, Schiff, and Lennox will receive honorary degrees at Commencement together with Edward B. Burger, the Francis Christopher Oakley Third Century Professor of Mathematics at Williams and newly appointed president of Southwestern University; Deogratias “Deo” Niyizonkiza, founder and director of Village Health Works; Richard D. Parsons, senior advisor at Providence Equity Partners Inc., former chairman of Citigroup, and former CEO of Time Warner; and Nancy A. Roseman, Williams professor of biology and a former dean of the college and director of the Williams-Exeter Programme at the University of Oxford, who was recently named president of Dickinson College.

Burger has gained national recognition for his innovation and leadership in the fields of mathematics and education. He will assume the presidency of Southwestern University on July 1. Burger has been a member of the faculty at Williams since 1990. In 2010, he received the Robert Foster Cherry Award for Great Teaching from Baylor University. He spent a year at Baylor serving as the Robert Foster Cherry Professor for Great Teaching, after which the university invited him to serve as vice provost for strategic educational initiatives. The recipient of numerous national awards, including the 2001 Deborah and Franklin Tepper Haimo Award for Distinguished College or University Teaching of Mathematics and the Chauvenet Prize from the Mathematical Association of America, Burger was inducted in 2013 as an inaugural fellow of the American Mathematical Society. He has written numerous articles and books, including 2012’s The 5 Elements of Effective Thinking, co-written with Michael Starbird from the University of Texas at Austin. Burger has delivered lectures worldwide, appeared on numerous radio and TV programs, and written articles for journals such as The Chronicle of Higher Education and Inside Higher Ed. Burger received his bachelor’s degree from Connecticut College and his doctorate in mathematics from the University of Texas at Austin.

In her hall-of-fame tennis career, King won 39 Grand Slam singles, doubles, and mixed doubles titles, including a record 20 titles at Wimbledon. She was named Global Mentor for Gender Equality by the United Nations Educational, Scientific, and Cultural Organization (UNESCO) in 2008, and a year later President Obama awarded her the Presidential Medal of Freedom, the highest civilian honor in the United States. Also in 2009, King received the NCAA President’s Gerald R. Ford Award in recognition of her contributions to improving higher education and intercollegiate athletics. A longtime advocate for gender equality—both in and out of sports—she founded the Women’s Tennis Association in 1973, the Women’s Sports Foundation in 1974, and co-founded World TeamTennis, the groundbreaking mixed men’s and women’s professional tennis league. In one of the most watched events in sports history, King defeated former champion Bobby Riggs in 1973’s “Battle of the Sexes” tennis match. That same year, King lobbied for and obtained equal prize money for men and women in the U.S. Open. In 2007, she co-founded GreenSlam, an environmental initiative for the sports industry. King was named one of the “100 Most Important Americans of the 20th Century” by Life magazine in 1990. In 2008, King wrote Pressure is a Privilege: Lessons I’ve Learned from Life and the Battle of the Sexes to commemorate the 35th anniversary of her match against Riggs. She continues to be a leader in the fight for equality in the LGBT community and has been honored by many LGBT organizations, including the Human Rights Foundation, GLAAD, and the Lambda Legal Foundation.

Named as one of the 100 Greatest Singers of All Time by Rolling Stone magazine, internationally acclaimed singer-songwriter and human rights activist Annie Lennox rose to fame with Dave Stewart as Eurythmics in the early 1980s, with the classic album “Sweet Dreams are Made of This.” In the decade to follow, Eurythmics went on to achieve more than 20 international hits. In 1992, Lennox released her debut album, “Diva,” selling more than 6 million copies worldwide, and establishing her career as a solo artist. Lennox has received numerous accolades, including eight Brit Awards, 10 Grammy nominations, four Grammy Awards, a Golden Globe, and an Academy Award. In 2002, she received the Billboard Century Award, the highest accolade from Billboard magazine, and earned the distinction of “most successful female British artist in UK music history.” In 2003, Lennox performed at the inaugural concert for Nelson Mandela’s HIV/AIDS campaign, 46664. Her experience in South Africa inspired her to found the SING campaign, supporting women and children affected by HIV/AIDS. A goodwill ambassador for UNAIDS, Oxfam, Amnesty International, and the British Red Cross, she is also Special Envoy for Scottish Parliament and the City of London. She received the Woman of Peace Award at the 2009 World Summit of Nobel Peace Laureates, and in 2011 was named an Officer of the Order of the British Empire (OBE) in recognition of her humanitarian work. 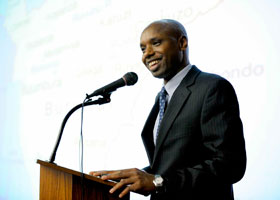 Niyizonkiza is the founder and chief executive officer of Village Health Works (VHW), a grassroots nonprofit organization that provides quality, compassionate health care in a dignified environment, currently operating in his rural Burundi hometown. He is the subject of Tracy Kidder’s Strength In What Remains, which recounts Niyizonkiza’s journey from medical student in Burundi to struggling immigrant in New York City to global health practitioner and doctor-in-training. In 1994, Niyizonkiza fled to New York after surviving a massacre at a Burundian hospital where he was a medical school intern. He overcame homelessness and other obstacles and eventually enrolled in Columbia University. He then attended the Harvard School of Public Health, where he met Dr. Paul Farmer and began working at his medical nonprofit organization Partners In Health. He left to continue his medical education at Dartmouth Medical School and later took a hiatus to found VHW. Today VHW operates Burundi’s premier health center as well as agricultural development programs, educational services, and income-generating projects for women. Niyizonkiza has received numerous awards, including the 2013 Eisenhower Medallion Award, St. John’s University’s 2011 International Medal Award and a 2010 Women’s Refugee Commission Voices of Courage Award. 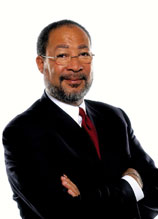 Parsons is senior advisor at Providence Equity Partners Inc., a leading private equity investment firm specializing in media, communications, and information companies. He is the former chairman of the board of Citigroup and former board chair and CEO of Time Warner, the world’s largest media and entertainment company. In its January 2005 edition on America’s Best CEOs, Institutional Investor magazine named Parsons the top CEO in the entertainment industry. Before joining Time Warner in 1995, Parsons was chairman and CEO of Dime Bancorp Inc., one of the largest thrift institutions in the United States. He has held various positions in New York State and federal government, including as counsel to Gov. Nelson Rockefeller and as a senior White House aide under President Gerald Ford. In 2008, Parsons served as a member of then President-Elect Barack Obama’s Economic Transition Team. He currently serves on the President’s Council on Jobs and Competitiveness and as chairman of New York Gov. Andrew Cuomo’s New NY Education Reform Commission. Parsons serves on the boards of the Museum of Modern Art, the American Museum of Natural History, and the Rockefeller Foundation. He studied as an undergraduate at the University of Hawaii and received his law degree from Union University’s Albany Law School.

Roseman will assume the presidency of Dickinson College on July 1. She came to Williams in 1991 as an assistant professor of biology. She also served as dean of the college from 2000 to 2007, assistant to the president for special projects from 2008 to 2010, and director of the Williams-Exeter Programme at the University of Oxford from 2010 to 2012. During her tenure at Williams, Roseman established new offices; managed staff and budgets; and collaborated with students, faculty, and donors. She created a new residential life program and founded the college’s Academic Resource Center. She also served on numerous committees such as the Faculty Steering Committee, the Committee on Educational Policy, the Science Executive Committee, the advisory committees for programs in biochemistry and molecular biology and women’s studies, and the Lecture Committee. As a researcher, Roseman has received grants from the National Science Foundation. Her work has been published in numerous journals, including The Journal of Virology and The Journal of Biological Chemistry. Roseman received her undergraduate degree from Smith College and her doctorate from Oregon State University.

Schiff is a bestselling biographer. Her first book, Saint-Exupéry: A Biography, about French writer Antoine de Saint-Exupéry, was a finalist for the 1995 Pulitzer Prize and a recipient of numerous awards abroad. Her second book, Véra (Mrs. Vladimir Nabokov): Portrait of a Marriage, a biography of  Véra Nabokov, won the 2000 Pulitzer Prize. She is the author as well of the award-winning A Great Improvisation: Franklin, France, and the Birth of America. Her most recent book, Cleopatra: A Life, was published in 2010 to universal acclaim. A #1 bestseller and New York Times Best Book of the Year, it is to be translated into 36 languages. Schiff has received fellowships from the Guggenheim Foundation and the National Endowment of the Humanities, and she was a Director’s Fellow at the Cullman Center for Scholars & Writers at the New York Public Library. In 2006, she received an Academy Award in Literature from the American Academy of Arts and Letters. In 2011, she was named a Library Lion by the New York Public Library. Schiff has written for The New Yorker, The Washington Post, and the L.A. Times, among other publications, and she is a frequent contributor to The New York Times where she has been a guest columnist. A native of nearby Adams, Mass., she received her bachelor’s degree from Williams in 1982.