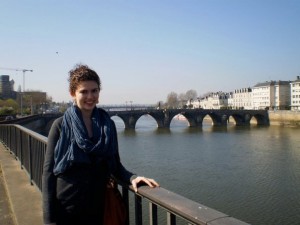 Denham, who is from Davidson, N.C., plans to pursue an M.Phil. in European literature and culture while at Cambridge, concentrating on early modern. Afterward, she intends to pursue a Ph.D. in history in the United States.

At Williams, Denham is majoring in history and German. She is writing an honor’s thesis in history titled “Between Sublime Porte and Hofburg: Ceremonial Negotiations at the Habsburg Court, 1748-1755.” The thesis examines mid-eighteenth-century negotiations between the Habsburg and Ottoman empires to argue that court ceremony and diplomacy were deeply intertwined in this era and also that reciprocity defined the relationship between those two powers.

Denham spent her junior year at the University of Oxford as a visiting undergraduate student studying German and history. Denham was recently awarded the Dr. Herchel Smith Fellowship for graduate study at Cambridge, named the spring Ruchman Student Fellow at the Oakley Center for Humanities and Sciences, received the Robert G. Wilmers Summer Travel Fellowship for the summers of 2010 and 2011, and is a member of Phi Beta Kappa.

She serves as co-president of the student branch of the Stanley Kaplan Program in American Foreign Policy, and she works in the Chapin Library of Rare Books. At Oxford, Denham was a member of the Oxford Union Debating Society and the Oxford University Walking Club, and she worked in the Williams-Exeter Program Library. Denham plans to continue to participate in politically oriented groups at Cambridge and hopes to work at a library there.

There are two distinct rounds of application for a Gates Cambridge Scholarship, the first for U.S. citizens and the second for non-U.S. citizens. In the U.S. competition, typically 750 applicants apply, 100 are invited to personal interviews, and 40 scholarships are offered. This year, interviews took place in early February in San Francisco. In late March, applicants from other countries will be interviewed. Candidates are selected on the basis of intellectual ability, leadership potential, a desire to improve the lives of others, and the ability to make a good fit with Cambridge. In total, 90 scholarships will be offered this year.

Founded in 1793, Williams College is the second-oldest institution of higher learning in Massachusetts. The college’s 2,000 students are taught by a faculty noted for the quality of their teaching and research, and the achievement of academic goals includes active participation of students with faculty in their research. Students’ educational experience is enriched by the residential campus environment in Williamstown, Mass., which provides a host of opportunities for interaction with one another and with faculty beyond the classroom. Admission decisions are made regardless of a student’s financial ability, and the college provides grants and other assistance to meet the demonstrated needs of all who are admitted.

See our Covid-19 website for strict health and safety protocols for those who remain on campus. All Williams College buildings are closed to the public and visitors until further notice.