WILLIAMSTOWN, Mass., November 28, 2018—Williams College student Linda Worden ’19 is among the 11 men and women named as Canadian Rhodes Scholars for 2019. Worden has been selected to join a class of 100 students from more than 60 countries worldwide to receive this distinguished scholarship to study at Oxford University next year. She is Williams’ 39th Rhodes Scholar.

Since the establishment of the scholarship in 1902, nearly 8,000 Rhodes Scholars, including more than 1,000 Canadians, have gone on to serve at the forefront of government, the professions, commerce, the arts, education, research, and other domains. The Rhodes Scholarships for Canada are a partnership between the Rhodes Trust and the Second Century Founder John McCall-MacBain.

The Scholars were selected in a highly competitive process administered by six regional committees composed of Rhodes Scholars and eminent members of the community. The committees worked independently and made their decisions on the basis of applications, university endorsements, letters of reference, and in-person interviews held across the country in the past week. 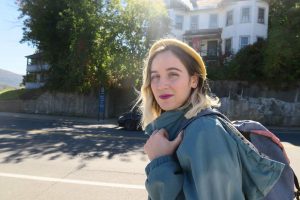 A political economics major from Penticton, British Columbia, Worden plans to use her Rhodes Scholarship to pursue an M.Phil. in comparative social policy, examining citizen participation in policy formation, particularly in countries such as New Zealand, Australia, and her native Canada. Inspired by the documentary film, The Pruitt-Igoe Myth, and David Harvey’s essay, “The Right to the City,” Worden is interested in finding new ways of conceptualizing urban spaces, citizen participation, and communities. “As Canada launches its first-ever National Housing Strategy, I am particularly interested in the consultation processes with First Nations communities,” Worden says.

During her junior year in the Williams-Exeter Programme at Oxford, Worden studied housing policy with Professor of Public Policy Peter Kemp, one of the world’s pre-eminent housing policy scholars, as well as history, politics, social policy, and law. While there, she formed connections with members of the university and actively engaged with the local community. Worden volunteered with the Oxford Homeless Action Group, where she planned and coordinated a successful fundraiser, and with On Your Doorstep, a student campaign against homelessness.

As part of Winter Study in 2017, Worden undertook an independent study project to interview precariously-housed LGBT youth in Vancouver, Canada, an experience that prompted her to combine her interests in social policy and housing justice and set her on her current path. An article stemming from her work is currently under consideration for the Toronto Urban Journal.

“We think of Linda Worden as a natural leader poised to effect social policy reform in Canada one day,” says Williams’ President Maud S. Mandel. “Already she counts as an expert on public housing in almost any room. As a Rhodes Scholar at Oxford, she will transform her community in the best of ways.”

At Williams, Worden is a leader both on and off campus. She is a member of the Gargoyle Society, a senior honor society, has served as a social coordinator for the Queer Student Union, worked with her fellow students to develop orientation programming for first-year international students, and was a tutor with the economics department. As a researcher at the Susan B. Anthony Birthplace Museum in Adams, Mass., she wrote a paper on the history of the International Council of Women for the museum’s archives. Beyond academia, Worden plays roller derby and has played the sport in both Oxford and Bennington, Vt.

“It’s rare for students’ academic interests, social activism, career aspirations, and personal backgrounds to align as closely as Linda’s,” says Director of Fellowships Katya King. “It was a real pleasure to work with her, to watch her think, to hear her articulate her ideas and goals. She is a brilliant person who will make a positive difference in the lives of others. Hers will be a career to watch.”

Worden expressed her gratitude to the Fellowships Office for all their efforts to help her win the Rhodes Scholarship. “Williams supported every detail of my final interview, including the clothing,” she says. “Director of Fellowships Katya King and Fellowships Coordinator Lynn Chick provided incredible guidance, and I am forever in their debt.” She also thanked faculty who provided valuable support during the application process. “I am grateful for my references from Williams College, including professors Chris Waters, Gretchen Long, James Mahon, and Mérida Rúa, as well as Angela Wu,” Worden says. “I have had such moving and encouraging conversations with each of them.”

Worden is the 39th Williams student to be named a Rhodes Scholar since the program began in 1902. The most recent previous Williams recipients were a graduate of the college’s Center for Development Economics, Diala Issam Al Masri ’15, in 2016 and Brian McGrail ’14 in 2013. A full list and profiles of this year’s winners can be found on the Rhodes Trust website.