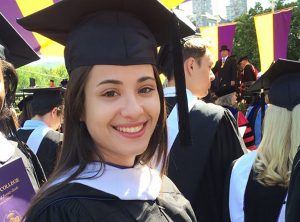 WILLIAMSTOWN, Mass., November 28, 2016—A recent graduate of Williams College’s Center for Development Economics (CDE), Diala Issam Al Masri ’15, is one of three newly named Rhodes Scholars from Syria, Jordan, Lebanon, or Palestine. This is the first year that the Rhodes Trust is choosing scholars from that region, the result of a new partnership with the Saïd Foundation that was announced in June. Al Masri is the first CDE graduate to be awarded a Rhodes Scholarship.

The Rhodes Scholarship is among the oldest and most prestigious academic awards for college graduates. It provides two or three years of study at the University of Oxford in England. Al Masri was selected from among hundreds of applicants from the new Middle East region.

Al Masri heard the news she’d been selected for the Rhodes while celebrating Thanksgiving at the home of Williams professor Magnus Bernhardsson. “There were a few moments of disbelief, then pure, overwhelming joy,” she said. “I feel deeply grateful to everyone who got me here, and at the same time, a responsibility to live up to the trust placed in me.”

A native of Lebanon, Al Masri received a Fulbright Scholarship to further her studies at Williams, taking a path less traveled to the CDE. Typically, CDE students are already working as economists in their home countries, but Al Masri came to the CDE directly after completing her bachelor’s degree in political science/international affairs with a minor in economics in 2014 at the Lebanese American University in Beirut.

The CDE offers an intensive, one academic year master’s degree program designed for economists from low- and middle-income countries, to provide them with a thorough understanding of the development process, emphasizing analytical techniques helpful to policymakers. It is one of two master’s degree programs offered at Williams (the other is a program in the history of art).

Since receiving her master’s in policy economics from the CDE, Al Masri has remained at Williams, working first as a teaching assistant at the CDE for the Class of 2016, and now in the Economics Department as a research assistant for professors Peter Pedroni and Peter Montiel. Her research encompasses determinants of capital flows and the long-term relationship of finance and development.

Pedroni said that while working with Al Masri, it became quite clear that her talent and ability for research outpaced what one would normally expect from a research assistant.

“Diala is at this stage of her career without doubt and by no small margin the strongest student to come from the CDE program,” Pedroni noted in his letter to the Rhodes selection committee. “In terms of aptitude and technical ability, I would say Diala is far more comparable to the best of the Williams undergraduates who double major in economics and mathematics, many of whom go on to study among the top five economics Ph.D. programs in the U.S. But most importantly, Diala has developed a sense of research maturity that exceeds even the most talented of our top undergraduates.”

Al Masri says her plan is to pursue graduate work in economics at Oxford to further her studies of econometric techniques and continue in a career as an economist and an academic specializing in low- and middle-income countries and fragile states. She points to two specific programs at Oxford—the Institute for Global Economic Development (OxIGED) and the Institute for Economic Modeling (INET)—as programs she would be involved with in her studies.

Al Masri’s educational journey started in her hometown in a rural area in the Lebanese mountains. She recalls hearing many times how being a woman in a male-dominated society would impose limits on her, but instead she says it empowered her. As an undergraduate student in Lebanon, Al Masri was very involved with leadership and humanitarian organizations. She was one of six Lebanese students chosen to be part of the Middle East Partnership Initiative Student Leaders program, where she interacted with leaders from the Arab region.

She participated as a leader in the Global Classrooms UNA-USA Model United Nations and served as a trainer for Mercy Corps, a global humanitarian aid agency that helps people survive after conflict, crisis, or natural disaster. She helped implement a pilot project on women’s empowerment with the United Nations Development Programme and worked with the World Youth Alliance’s Middle East operation to support Syrian refugees who were arriving in her hometown.

Pedroni said that working with Al Masri is a pleasure not only because of her technical ability, but also because of her deep sense of intellectual devotion that she conveys for the subjects that she pursues. “I have no doubt that Diala will make good use of her intellectual talents and abilities for social contributions,” he said.

Al Masri is the 38th Williams student to be named a Rhodes Scholar since the program began in 1902. The most recent previous Williams recipient was Brian McGrail ’14. More on the scholarships and profiles of the three Middle East region recipients can be found on the Rhodes Trust website.